Why Most Foreign Brands Become Popular in China Because of Influencers

Influencers serve as agents for the brand, either because they're paid to, or because they genuinely think that the brands are good options for their fans. Photo: Gucci, Shutterstock, Haitong Zheng.

It’s no secret that in the consumer retail industry in China, most new brands become popular because they were discovered by Chinese influencers or gray-market daigou sellers.

These players serve as de facto evangelists for the brand, either because they’re paid to, or because they genuinely think that the brands are good options for their fans.

Here’s a theoretical timeline for an emerging US brand that becomes discovered in China:

2.  Overseas Chinese students, influencers, gray-market daigou sellers in USA see the post, try out the product and start posting about it. Some bring it back to China

3.  Chinese influencers in China discover the brand, buy products from gray-market daigou sellers or friends, start posting about it

4.  Brand in US acknowledges that Chinese people are buying its products, starts marketing on Chinese social media

5.  After 6-18 months, gray market product sales grow and US brand opts to set up an official flagship store on Tmall Global (cross-border e-commerce) to sell directly to Chinese consumers

We take a deeper look at why this happens in China and highlight some leading examples.

It’s no secret that Chinese consumers are distrustful of new brands. Every week there are news stories about fake or shoddy products being exposed, oftentimes with afflicted customers being sent to the hospital and/or perpetrators sentenced to years in prison.

And frankly, it’s not going to stop anytime soon. There will always be some people who are willing to do whatever it takes to make money, including marking up fake products and selling them for a profit. There’s no way for the authorities, nor Alibaba nor JD.com to possibly inspect every product that gets sold online.

In the context of this scenario, how does the Chinese consumer make his/her buying decisions?

In a 2018 Frost & Sullivan study interviewing 1,000 cross-border e-commerce consumers, we found that 50% turn to friends & family for information on products they’re looking to buy.

But what happens when there are no friends & family to consult for a particular brand?

The same study shows that the second most commonly used source of information was social media; 32% of consumers reported that they turned to social media for information on brands.

And in China, social media is dominated by influencers, who tend to act as a medium between brands and consumers. They help narrow the options available and highlight the key pros and cons of each product.

Influencers, or key opinion leaders as they’re called in China, play an important role in the buying decisions of 37% of fashion customers. This number is 23% for beauty customers.

Next, we take a look at two brands that became popular because of Chinese influencers and later opened their on Tmall Global stores: Greek skincare brand Korres, and Japanese skincare brand Takami.

Founded by pharmacist George Korres in 1996, the skincare brand Korres has become well-known for its plant-based and Greek yogurt-based ingredients and can be found in Sephora stores in both the United States and Europe.

In 2018, a pharmaceutical & consumer health company from Shanghai named Profex purchased a 14% stake in Korres, making it the sole distributor of Korres products in China.

As of late, top China KOL 雪梨 Cherie has been promoting the brand on her Weibo account, specifically its face masks and Greek yogurt-based body lotion products.

One customer mentioned in a live comment that the smell of the face mask is fresh; there is no added fragrance, giving the customer a sense of cleanliness and assurance that the item doesn’t contain harmful additives.

Another customer mentioned that Korres’ face mask is highly recommended for dry, red, and dehydrated skin, saying that she plans to make more purchases in the future. 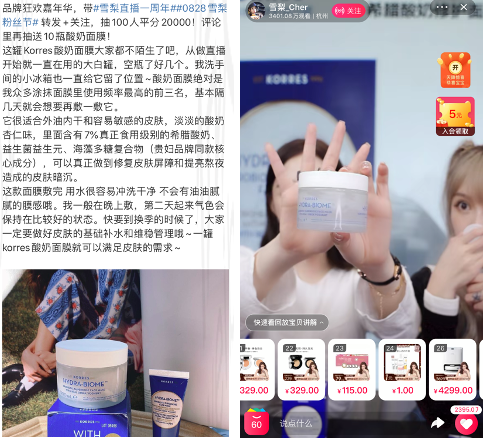 Another Weibo post from a doctor KOL (below) received 300,000 views. Testimonials from doctors and scientists lend credibility to new brands that may struggle to gain the confidence of customers.

In this particular campaign, the KOL offers a group-buying deal to ten customers who like and share the Weibo post. These ten customers are eligible to purchase the skincare product for 350 RMB.

On the livestreaming session, the KOL tested the mask on his face, mentioning that “this mask is highly recommended for dry, dehydrated skin, particular reddened skin that is used to having makeup applied on it”.

The hydrating mask purportedly stabilized the skin and made it more resilient. The KOL went on to mention that the item could be particularly useful for those who tend to sleep late or have recurring skin problems. 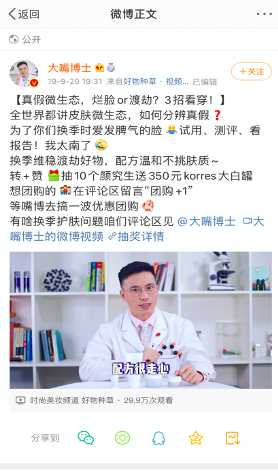 Takami was founded in 1999 and is known for its AHA (α-Hydroxy acids, alpha hydroxy acids) ingredients, which consist of plant- and animal-based acids. The brand was developed by a skincare clinic and is designed to reduce the occurrence of pimples, claiming to focus on the subcategory of medical aesthetics.

Takami purportedly analyzed the skin problems of 200,000 Asian women, before launching a product for mass production.

Only in 2005 did a version suitable for everyday consumers to launch on the market. Its signature product is a blue bottle; customers use eyedropper tools to apply the product to their skin.

After some popularity on the gray market, Takami finally set up a flagship store on Tmall Global in 2017.

Since then, the product has been pushed by top KOL Austin Li and celebrity actress Fan Bingbing.

Austin Li himself has oily, acne-prone skin, and gave the Takami Skin Peel (also Little Blue Bottle) a positive review for its ability to resolve his issues. The Takami Skin Peel softens and refines the skin without damaging the skin barrier, penetrating deeply to enhance the metabolic power of the skin.

In short, it helps to solve acne, blackheads, pores and dry skin problems, all with just one bottle. The Blue Bottle is rich in botanical extracts, and its natural formula creates a gentle, non-irritating, hydrating texture that is light, colorless and odorless for sensitive skin and acne-prone skin.

The brand is designed to meet the needs of today’s urban working-class women who may have stressful jobs and irregular lifestyles that leave their skin prone to breakouts. 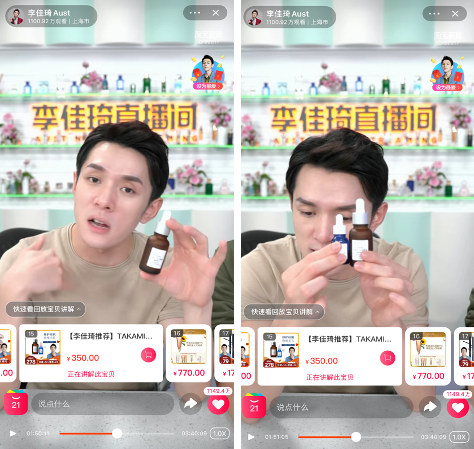 Mr. Li’s review is just one example of the power that China’s influencers hold over public opinion.

After his livestreaming session endorsing the brand, all of the social media platforms in China were flooded with comments from viewers saying that they planned to buy Takami’s products.

“After watching Austin Li’s review I feel like I just found the saviour of acne-prone skin,” one viewer wrote.

“Thanks Li for the recommendation. The effect was so good that after using one bottle, half of my pimples improved, and after the second bottle the acne ceased to grow altogether. Now my face feels smooth to the touch,” another customer added.

The customers that these skincare brands are appealing to are commonly referred to as “ingredient geeks” (成分党).

These customers are looking to solve specific problems with their skin and actively search for certain ingredients in the skincare products they purchase. They spend more time on product research than normal customers do, and take the time to understand the chemical processes behind the items they buy.

They are particularly looking to avoid harmful ingredients that may put their skin in worse conditions.

Korres’ unique positioning and yogurt-based ingredients help to set it apart from other competitors. Takami capitalizes on its Japanese roots and expertise in lab-based skincare products to appeal to its Chinese customers.

Working with KOLs and celebrities help to emphasize some of the selling points of these brands, making it easier for customers to discover, understand, and purchase the product. In fact, most emerging beauty brands in China become popular because these KOLs have brought it to the attention of mass-market customers.

Foreign brands have to understand that reliance on KOLs is much more heavily weighted than in the West, precisely because of the prevalence of fake and shoddy products in China, and also because of the large number of new brands that have entered the market in recent years. KOLs help customers to sift through the noise and focus on what’s important.

1. In China, many emerging beauty brands become popular because key opinion leaders (KOLs), or influencers, have brought them to the attention of mass-market customers. This is partly due to trust issues with new brands, and partly because of the sheer number of new brands that have entered the market.

2. Korres is one Greek yogurt-based skincare brand that became popular because of its endorsement by top KOLs and testimonials from doctors.

3. Takami is a Japanese skin clinic brand that was endorsed by top KOL Austin Li. It serves to improve damaged or reddened skin.

4. KOLs are particularly appealing to certain customers who are looking to solve certain skincare problems with specific ingredients. This group of customers spends much more time on product research and understanding the scientific processes behind the skincare products they buy.

Our most popular articles you may have missed
Social Media
How Cartier Won China’s Social Media
The Future of Luxury
Why Focusing on Gen Z Is A Matter Of Survival For Luxury Brands
Marketing & Branding
Four Marketing Tactics To Win China In 2021
The Future of Luxury
China’s Luxury Market Will Only Get Trickier In 2021
Marketing & Branding
Did Luxury Brands Learn Their Lessons This CNY?
Retail
Why Storytelling Is The Key To Luxury’s Hi-Tech Future
We use cookies on our website to give you the most relevant experience by remembering your preferences and repeat visits. By clicking “Accept”, you consent to the use of ALL the cookies.
Cookie settingsACCEPT
Privacy & Cookies Policy