There’s a saying on Chinese social media that goes: “Marketing is all about finding the correct timing and method,” and when it comes to China’s livestreamer industry, there is no better time than now to break in. Social media platforms have become a growing avenue for consumers to connect with influencers. But now, they can purchase products from them too, which is why livestream e-commerce has become so lucrative.

Previously, China’s army of professional influencers and KOLs had been more dependent on brand sponsorships, paid posts, or endorsement deals, but e-commerce represents a growing segment of their market. Content Commerce Insider’s latest white paper, titled Next Level Livestreaming: How Luxury Brands Can Profit From China’s Top E-Commerce Trend, reported that the gross merchandise volume of KOL sales from influencer campaigns was valued at $11.1 billion in 2019 and is predicted to grow to $27.4 billion by 2022.

Since 2019, all types of citizens have been trying their hand at hosting livestreams, from celebrities and entrepreneurs to (surprisingly) government officials. Moreover, platforms are also tapping into the trend by developing technology that would make them the top choice for fashion shows. Taobao, JD.com, Douyin, and Kuaishou have all entered the game with the hopes of winning a share of this dynamic market. 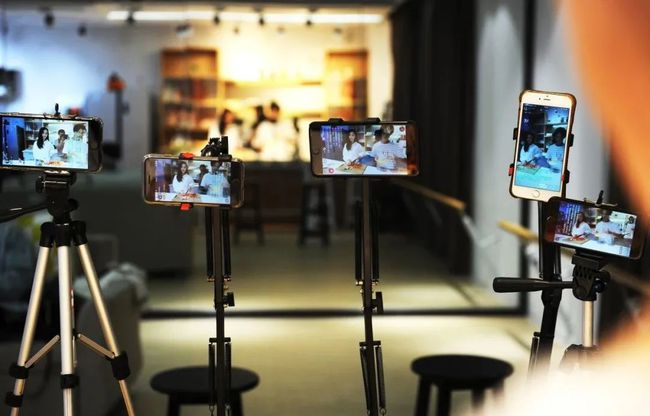 Choosing the correct KOL for a brand is a tricky yet crucial task for brands. Source: 163.com

KOL marketing or brand collaborations with influencers who are experts in their field is a powerful tool in China because consumers tend to trust recommendations from third parties over the brands themselves. It works best when the influencer represents the brand but is also well-known enough to attract large targeted audiences. Therefore, choosing the correct KOL for brands can be a tricky yet crucial task. Below, Jing Daily offers five tips for brands about how to pick the best KOL livestreamer.

While we are currently seeing a prosperous wave of livestreaming e-commerce, the medium is still in its early stages, and return on investment has been difficult to calculate. Offline fame may not necessarily translate into sales, and for some, livestreaming has not lived up to expectations. Comedian Xiao Shenyang, who is considered a mega-celebrity with tens of millions of Weibo fans, only sold about 20 orders during a Kuaishou livestream. Singer and actress Ye Yiqian’s attempt at livestreaming also failed miserably to convert, when she attracted 900,000 viewers to her livestream but only made $290 in sales. 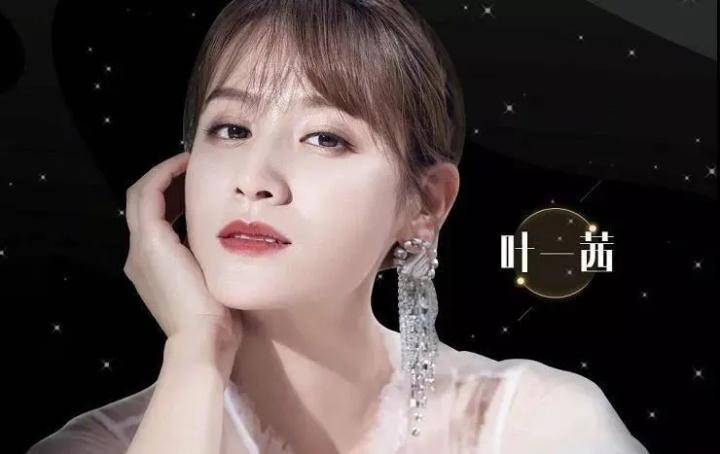 Fans tend to pay more attention to the celebrities themselves rather than the products. Source: twgreatdaily.com

One of the reasons for this disparity between fame and sales is that fans tend to pay more attention to the celebrity livestreamers than the products they are advertising. Therefore, attempting to achieve high purchase rates based solely on a celebrity’s popularity could backfire. After all, fame does not equal influence, and it cannot accurately measure purchasing power.

But, unlike celebrities, professional KOLs have been deeply involved in a product’s placement and have accumulated tons of relevant knowledge. Before the livestream, these anchors arm themselves with product expertise and experience that will appeal to consumers. Unless the chosen celebrity happens to be the expert in a certain merchandise type, KOL anchors typically yield better results.

In recent years, virtual idols have been a hit with China’s Gen-Z audiences and have displayed strong commercial potential. One of the most significant examples is the anime-inspired virtual star Luo Tianyi (洛天依), who appeared in an April broadcast alongside China’s most famous living livestreamer, Li Jiaqi, for the beauty brand L’Occitane. They both went on to headline Taobao’s online ACG (Anime, Comic, and Games) festival in May, an event that drew nearly 3 million viewers.

Virtual idols offer different advantages, such as infinite malleability, a guarantee that they’ll remain scandal-free, and the ability to work endless hours. However, virtual idols are just as pricey as human livestreamers. In fact, they command some of the highest fees in the business, with Luo Tianyi’s May Taobao appearance reportedly costing $127,000. 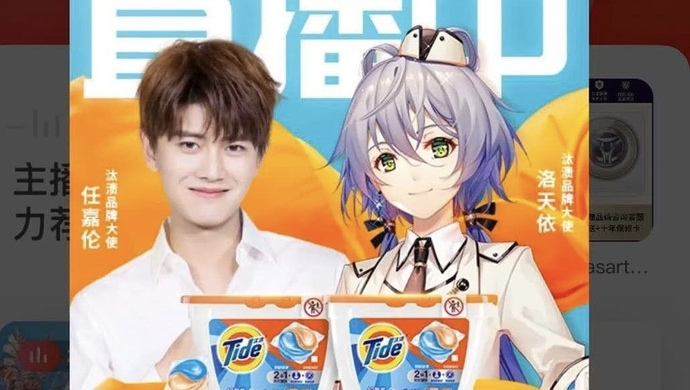 Virtual presenters cannot relate emotionally to audiences like humans do, especially when they cannot try on products. Source: shobserver.com

Before tapping a virtual host, there are other downsides for brands to consider. Virtual presenters cannot relate emotionally to audiences like humans do, especially when they can’t try on products. Moreover, products must be carefully matched to the virtual idol’s fanbase — even a well-known idol like Luo Tianyi. Miro Li, the founder of the Chinese consulting company Double V, stated that female virtual idols like Luo Tianyi and Miku target male Gen-Zs and work best with electronics or other ACG merchandise. Male idols, on the other hand, are used to target female consumers and are more suited to beauty and fashion, such as the anime characters from the Chinese dating simulation game Mr. Love: Queen’s Choice (恋与制作人).

On the supply side of the livestreaming industry, platforms are competing to recruit hundreds of celebrities and executives to draw in viewers and sell products. Sina News reported that the demand for livestreamers has grown dramatically this year, and the livestreaming market value will soon exceed $136 billion.

Choosing a platform that matches a KOL is a complicated process that could heavily impact sales. Source: 36kr.com

When confronted with the many platforms in China, choosing one of them — along with a KOL that is suited to that particular platform — is a complicated process that could make or break sales. For example, users of the lifestyle app RED are 80-percent female, under the age of 35, and from tier-1 or tier-2 cities in China. Therefore, it’s a perfect platform for beauty and cosmetic brands to use KOLs to help increase brand awareness.

In an interview with Jing Daily, Amber Wu, a KOL strategist from Shanghai, suggested that working with big KOLs on Weibo is better for brands who are looking for publicity or driving direct traffic to their Tmall stores. Weibo is an open platform with more users, and links can be added in the posts for visibility. However, Wu added, brands must have a big budget to do this.

KOLs are often signed with MCNs (Multi-channel networks) that connect brands with livestream talents and platforms. The industry has developed rapidly, from fewer than 100 companies in 2012 to a staggering 20,000 in 2019. That spike was largely driven by the rise of e-commerce livestreaming, which overtook advertising as the largest source of MCN revenue last year. 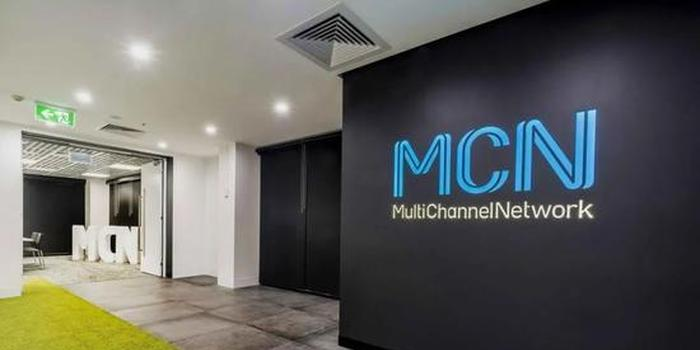 There have been controversies surrounding MCNs and their results. Source: sina.com

More than 90 percent of China’s influencers work with MCNs, but these agencies vary greatly in their offerings and areas of focus. Typically, brand contracts with MCNs consist of three elements: guarantees for discounts or other promotions, a signing fee for the host, and a commission on sales (usually ranging from 20 to 30 percent).

However, there have been controversies surrounding MCNs and their results. According to Wu, MCNs are only one option. “Usually, we tend to do some research and directly approach KOLs who have already posted about the brand organically because it shows their interest and willingness to match the brand’s style,” Wu explained. She often identifies KOLs from Weibo and RED with a high engagement rate instead of solely checking the number of followers.

“Generally, when we approach the KOL about content seeding, they are quite happy,” Wu said. “We manage to get some great exposure just through gifting. And, we also found them easier to work with long term.” 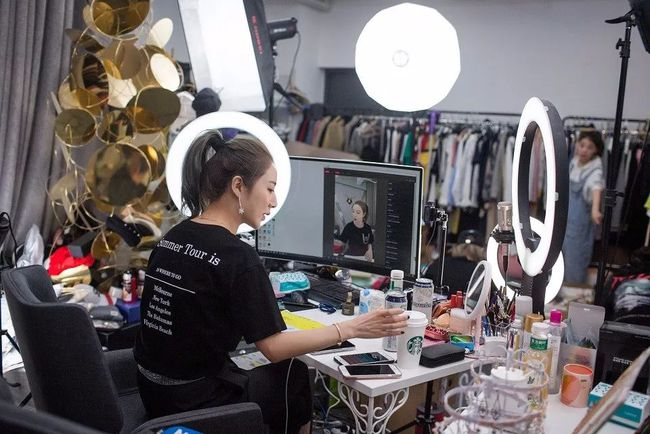 The livestreamer with the biggest fan following might not be the best fit. Source: Zhihu.com

In most cases, the brand’s goals, objectives, and aesthetics will drive the best livestreamer fit. Whether that is a nano-level livestreamer or a superstar, it must be an authentic reflection of the brand. As Ellen Le, operations director of the Douyin KOL account @nycfoods, noted, the biggest fan following might not always be the best fit.

“For brands with a high budget, I recommend collaborating with top KOLs just to increase exposure,” Le said. “But for brands that are just starting or have limited budgets, my suggestion is to choose some mid or low-tier influencers [below ten thousand followers].” Although lower-tier KOLs have fewer followers, Le added, their fans are more loyal, so the conversion rate is not necessarily worse than those of top influencers.

Like most things in China, it is complicated. Influencer marketing is not a one-size-fits-all solution. But regardless of your final choice, brand values, the target audience, and the everchanging online arena are all going to be influencing factors.