Which Chinese Video-Sharing Site Is Right For Your Brand?

Douyin, Kuaishou, and Bilibili are undeniably the top emerging platforms in China today, but which is the best one for your luxury business? Photo: Shutterstock. Composite: Haitong Zheng

“I know video-sharing platforms are popular in China, but which fits my brand best?” This question is one many have asked when first trying to promote their brands in the China market.

Douyin, Kuaishou, and Bilibili are undeniably the top emerging platforms in China today, and it is clear that they all offer considerable opportunities for brands wanting to reach target audiences. However, the three platforms are incredibly different in many ways, especially in this fast-changing post-pandemic environment.

Here, Jing Daily takes a deep dive into the differences between these three platforms, so you can pick the one that best suits your brand.

Similar to TikTok, the majority of Douyin’s videos have a duration of less than one minute. Under the slogan of “records the wonderful life,” Douyin emphasizes video content quality more. Therefore, most of the high-ranked accounts feature professional KOLs and celebrities.

Kuaishou, Douyin’s biggest rival in China, was the first short-video social media app in China. Compared to Douyin, Kuaishou emphasizes “authenticity” and “ordinary people,” as its slogan is “embrace every kind of life.” Kuaishou’s positioning could lead to deeper user engagement, as Topklout’s report shows that it recorded a higher percentage of viewers who left comments than on Douyin.

Bilibili is a long-video interactive community with superior emotional bonding

First launched in 2009 as a content community for anime, comics, and games (ACG), Bilibili has now upgraded itself to a full-spectrum online entertainment platform that covers video, live broadcasting, and mobile games. As a video-sharing platform, Bilibili mostly features long videos. However, it should not be considered a Chinese version of YouTube.

Instead, many see Bilibili as a community because of its bullet chat feature — a live-commenting function that can be used while watching videos. This feature creates a strong emotional connection between users and meets the younger generation’s demand for self-expression. However, as Bilibili’s user groups quickly expand beyond its original ACG followers, conflicts between the ACG community and newcomers have become a challenge for Bilibili.

All three platforms’ monthly active user (MAU) numbers have grown to 200M based on newly-released data. Using QuestMobile’s research on the three sites from June 2020 as a reference, we can see that Douyin and Kuaishou lead in MAU numbers. Although it continues to announce an over 50-percent YoY user increase rate, Bilibili is still undergoing a user expansion period and owns fewer MAUs. 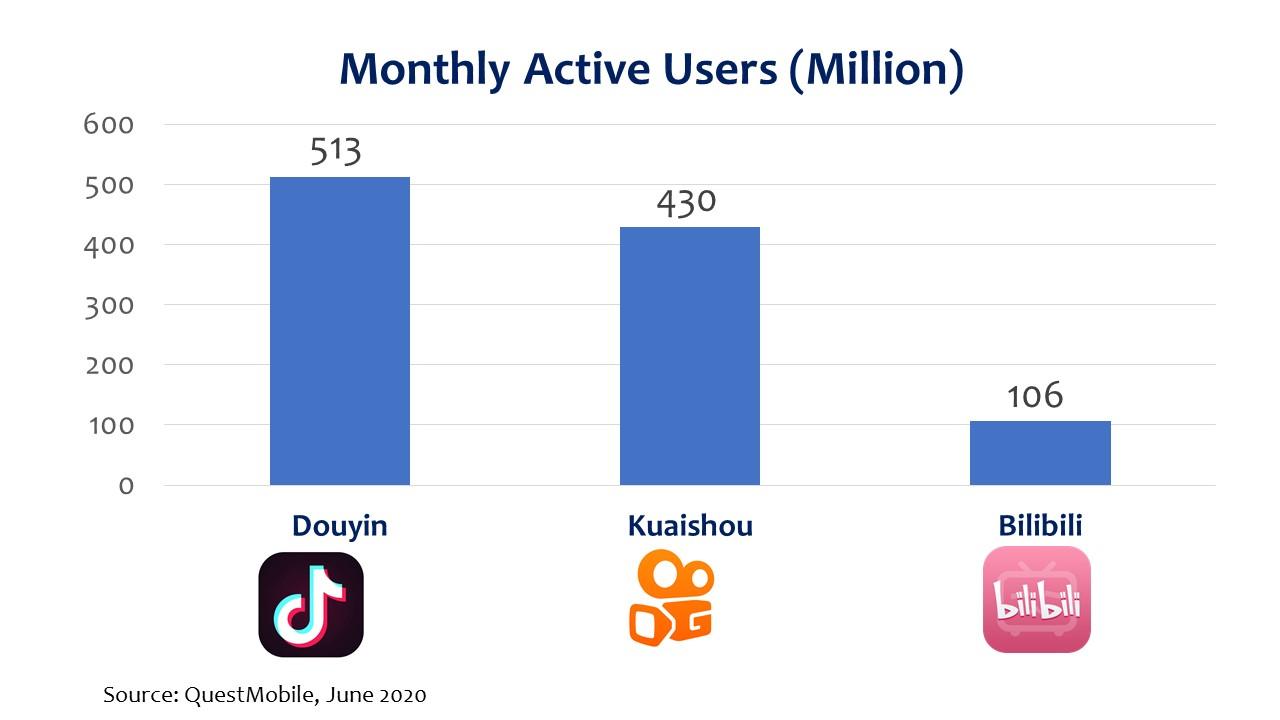 In terms of user gender, Bilibili and Kuaishou have more male users while Douyin is occupied more by females. 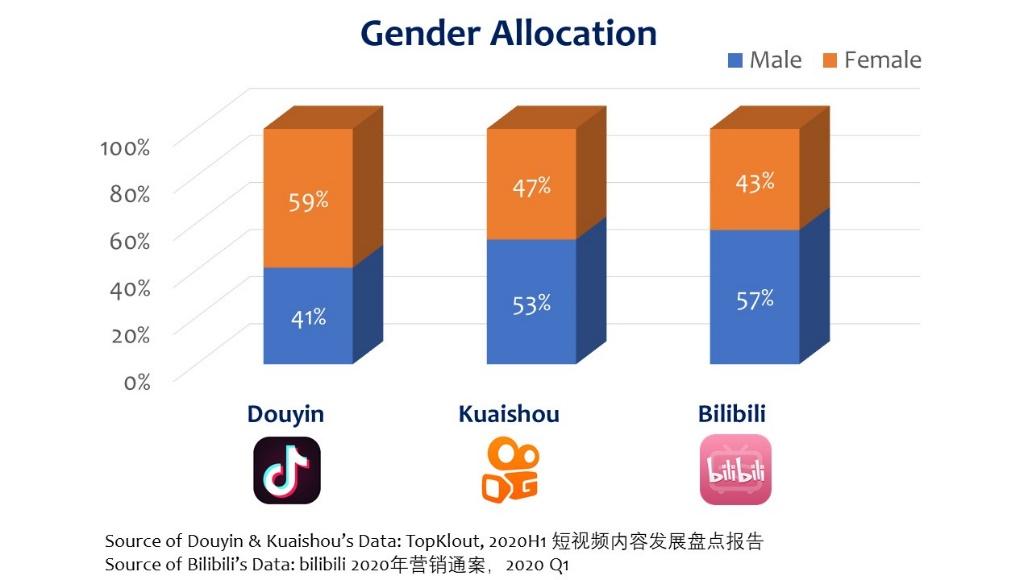 Regarding penetration in different cities, Douyin still has advantages in tier-1 and tier-2 cities, even though Kuaishou conducted an aggressive campaign to recruit urban users in 2020. In contrast, Kuaishou gains more support from followers living in rural areas, with nearly 40 percent of its users coming from tier-4 cities or below. 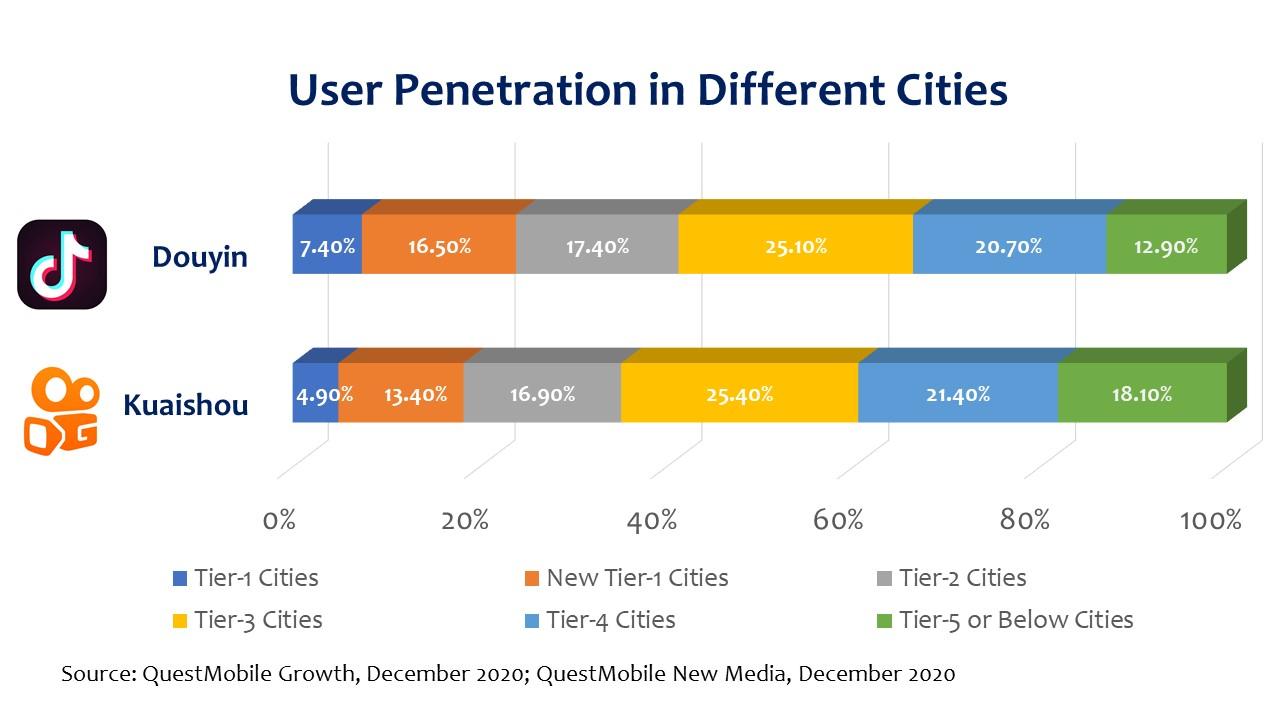 Bilibili’s user profile is a bit similar to Douyin’s. Bilibili says that 55 percent of its users are from China’s most developed regions: Eastern China and Northern China. Additionally, Bilibili’s users are more likely to be educated with a bachelor’s degree, and their undergraduate ratio was 10-percent higher than other platforms’.

Concerning user age, both Douyin and Kuaishou are dominated by post-80s and post-90s generations, which account for nearly 50 percent of the two apps’ total users. Also, Bilibili claims around 78 percent of its users are between 18-35 years old, having grown up with Bilibili.

Under the slogan “records the wonderful life,” videos that feature handsome boys and beautiful girls or celebrities are more likely to have a higher number of likes on Douyin. According to TopKlout’s research, the top-five video categories on Douyin are handsome boys & beautiful girls, food, music, humor, and games. Celebrity videos receive the most engagements per video.

Even though videos on Kuaishou talk more about grassroots life instead of the glamorous life, videos featuring good-looking people, games, humor, music, and food are also its top-five most popular themes but with a slightly different ranking than Douyin’s.

In Bilibili’s Q3 2020 financial presentation, it revealed that lifestyle topics like vlogging and fashion are its most popular, followed by pop culture/celebrity entertainment, anime, and tech/knowledge topics.

Douyin favors quality video and celebrities and KOLs with huge fan bases. Meanwhile, Kuaishou and Bilibili share some common features regarding content distribution. Both distribute videos by taking network and user interests into account. Compared to Douyin’s centralized algorithm, Kuaishou only allocates 30 percent of its traffic to the top KOLs.

Other potential competitors to watch

First launched in January 2020, the WeChat Video Channel has since recorded a significant increase in users. Moreover, with its ability to leverage WeChat’s existing billion-person user base (and zero migration costs to users), we think the WeChat video channel will be a potentially strong competitor.

Though Weibo has not made huge moves on developing its video-sharing sector, it is still a top social media platform in China with an abundant amount of top celebrities and KOLs.